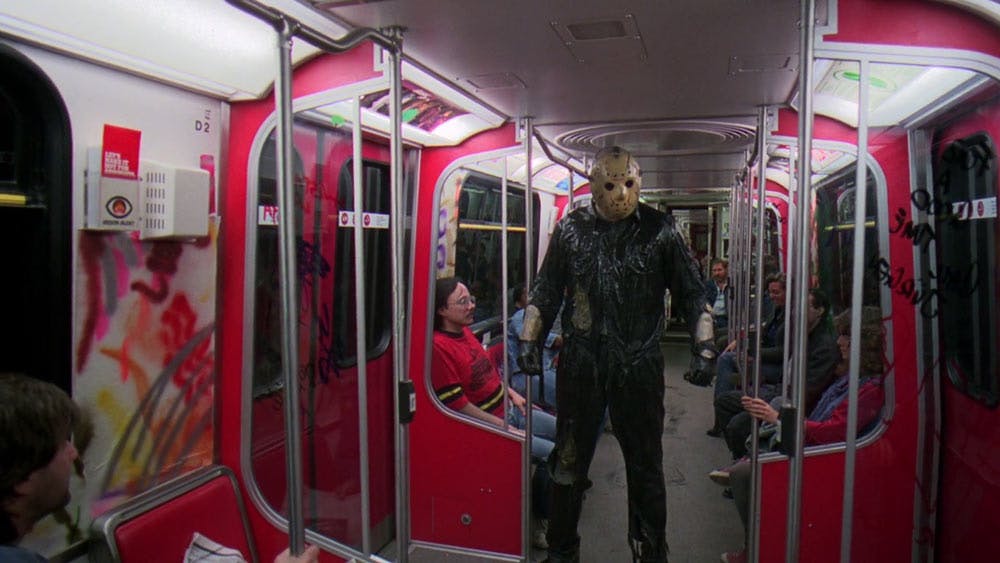 Despite how the general population tends to view movie drinking games as simpleton swill-athons, a proper set of film-themed sipping rules requires painstaking research and methodical formulation. Pick the wrong title and you’ll either lose an audience to boredom or be stuck finding consistent throughlines in a movie that’s 100% certified messiness. Any selection should have an acceptable level of schlock, gooey “cheesiness” dripping off its sides, but it shouldn’t be an unwatchable dumpster fire. You’re not drinking to make something watchable, but to enhance the communal appreciation of a midnight-friendly romp that might go down even easier with liquid lubrication.

Trust me, I’m a professional.

Take Rob Hedden’s Friday the 13th Part VIII: Jason Takes Manhattan, for example. A film mostly remembered for taking Jason Voorhees on a bloodsoaked cruise that docks in New York City, also marking an end to Paramount’s original franchise run. It’s everything Crystal Lakers weren’t accustomed to as it features some significant maskless Jason shots and isn’t looked at with much fondness. Maybe some were thrown by screentime at sea vastly outweighing the five-boroughs exploration of America’s busiest concrete jungle? Perhaps others were befuddled by Jason’s ability to vanish, reappear, and defy logistical gravity? But here’s what I’m happy to remind y’all of — Part VIII provides some primo slasher entertainment.

There are so many details that continue to baffle and intrigue after countless rewatches, from Manhattan’s dystopian depiction where toxic sewage containers froth green, unctuous sludge to an incomprehensibly large body count (20+ going by my notes). Director Rob Hedden’s focus is on slaughtering innocent school graduates, which leads to some memorable deaths by sauna rocks or Flying V electric guitars. Certain kills, like Tamara’s mirror-shard-stab exit, cut away right as Jason’s about to land his finishing blow, but with so *many* deaths, there’s still plenty of gruesomeness to behold.

That said, you’re not here to read an “In Defense Of” essay, nor do I have that kind of space. I’m here to stay on brand and offer my way of appreciating those franchise entries less understood … over beers! Below you’ll find carefully curated drinking game rules for Friday the 13th Part VIII: Jason Takes Manhattan, made especially for the Shudder blog.

A toast, my friends, to a Friday the 13th film that doesn’t hide barbaric intentions. Minimal character development leaves plenty of time for hair metal solos and waterlogged Jason’s wake of chaos. Hedden’s screenplay aims to enhance Jason’s legacy by going for broke, be it his underwater Frankenstein awakening, bygone found footage inserts or Julius Gaw’s lopsided boxing match with a horror icon. Maybe a more apt title would’ve been Jason Takes A Boatride, but that’s beside the point. For the time we do spend watching Jason display improper subway etiquette while taking in the Big Apple’s sights (and cleaning up its streets), I’m thankful. Because even popularized supernatural murderers just wanna have fun sometimes, and he’s earned a vacation, goshdarnit!

*Matt Donato is a freelance writer who analyzes cinema for outlets such as /Film, Collider, Bloody Disgusting, and Atom Insider. You can follow his work on Twitter, Instagram, and Letterboxd at @DonatoBomb.